A special woman: Parbati. We met her during a journey to Kathmandu, just before the 2015 earthquake.

In the south part of Kathmandu, in the Tripureshwor neighbourhood along the Bagmati river, there are many beautiful courtyards with Hindu temples, but also some of the poorest settlements, real slums built with found materials. Parbati, a little brave woman running a daycare center in a slum neighbourhood of Kathmandu.

Parbati lives in one of the courtyards with Shiva shrines and she keeps it clean. She has a decent accommodation, if compared to the slums. She can speak some English, which she learnt when working for an American family. She is very communicative, so she told us the story of her life.

In her heart she has her lost son (“my big baby”), who would have been 20 now. She loves children, because of her lost baby. So she keeps the children of the nearby slums in a sort of kindergarden, a little room next to the stables and the shrines. For many of the children, she is the one who provides meals and care, together with Tara, another mother.

We sat with them, drinking tea, while Tara was singing and the children dancing. Parbati has asthma, so she let me carry Tara’s daughter to the temple. She shares her time, energies and the little extra money she has with the families of the kids.

A tiny woman, with a deep inner strength.

The children of the daycare centre, unsuspecting of what very shortyly was about to happen. How could they have known? In those very days the 7th Nepal Geological Congress took place in Kathmandu where geoscientists from all over the world debated about when “The Big One” was going to come … Parbati’s daycare center lays in ruins after the earthquake. 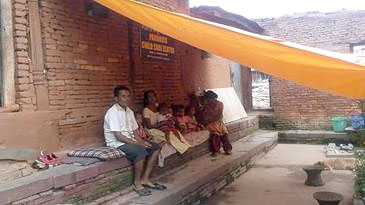 Help Nepal has inquired to ship the goods. That is far too expensive relative to the value of the shipment. We therefore call to make a donation. A trustworthy contact in Kathmandu will take care of things.

Parbati needs €500 to start up the daycare center again .
Let’s make a difference for those children and families.

No Replies to "ParBAtI DAYCarE CenTeR"

Got something to say? Cancel reply

Decide which cookies you want to allow. You can change these settings at any time. However, this can result in some functions no longer being available. For information on deleting the cookies, please consult your browser’s help function. Learn more about the cookies we use.

With the slider, you can enable or disable different types of cookies: